Painting exhibition: 2014
This exhibition was titled PLAYTIME, as the works were developed during my spare time, in breaks, from other artworks and time spent at Gallery 294
Two themes are involved: both are technique based

With the Daysdale Gum I needed larger circles, than I had used before, to protect the areas I wanted to keep and still allow easy access to the areas that I wanted to scratch out
I tried paper and card and plastic but getting accurate circles was not only difficult be very time consuming.
Then I remembered the large collection of discarded CD's and DVD's. from past lives, that I had squirreled away for that special project.
So armed with blue tack and my CD and DVD collection I set to work
What I didn't expect was the incredible colours that these devices emit when arranged together...there lies another artwork in the future. 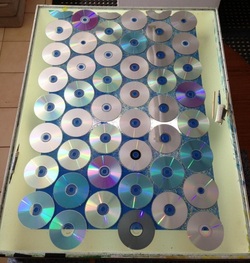 this shows the discs in place and all but the lower left side scratching done
My tools are near the work.
a stumpy skewer that I refer to as my elephants tooth pick
and a scribe in a clutch pencil holder


A detail of the discs and scratching are shown below
The full image will be up at a later date. 4/10/2014 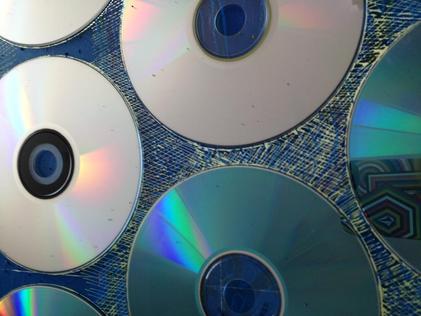 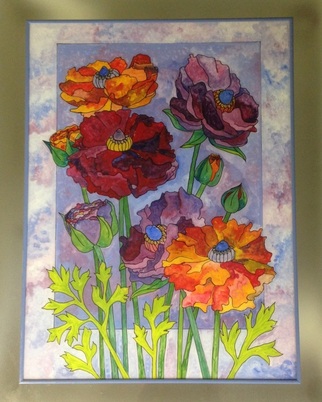 This painting was developed along the same lines as 'Pelicans'...however I decided, after much deliberation, not to scratch patterns into the back of the work.

Over the journey of these works have focused on the fact that memories are snippets of thoughts and images in the mind.

My memories over the last 3 years have been blurred by  'the fog' associated with the loss of a loved one.
I have also noticed that each time I do a painting, in this series, the amount of scratching has become less and less with each work explored. Paralleling the clearing of 'the fog'.

So being spring and being in a much clearer mind I decided to allow the ranunculus to speak for themselves.

However there is still a space between the ranunculus and the edge of the work which reflects the protective barrier that still exists.
10/9/14

When I try  a different technique I return to subject matter that is dear to me: that I have studied , drawn and analysed for many years. The main ones are pelicans, gum blossoms and circles.
Taking something that I know allows me to explore something. This is a journey that is self perpetuating.
When I explore different subject matter I explore it using techniques that I know.
The images below show the development of the technique of using stickers and scratching to create new images on glass 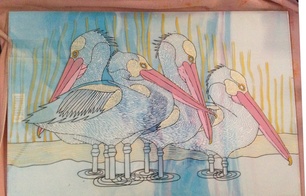 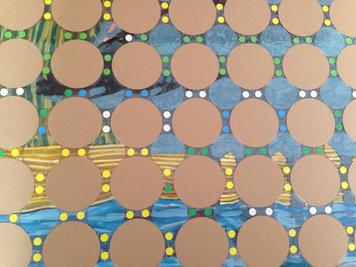 the final painting will be revealed later

Painting on canvas: A Lifetime of Stories 2014

Paintings on canvas involve automatic responses to the liquid nature of paints
The difference between acrylics, enamel printing inks and enamel fingernail paints (yes $2 a bottle at the local chemist ... and beautiful rich colours
The artwork above was created in several stages
The dark blue is thick old enamel silk screen printing ink which I was given when it was no longer able to be used
It was the smelly stuff that you had to clean up with thinners...the good old Brolite that sent several of us high in the early 70's when we printed all night in unventilated rooms... they were the so called 'good old days'
The enamel was dribbled, with deliberation, across the canvas to create lines of varying thickness
The work was left horizontal for several weeks in the shed ...i think it eradicated all the bugs in the shed, and I know my dog Bonnie would not go in there
Once Bonnie entered the shed the next stage began 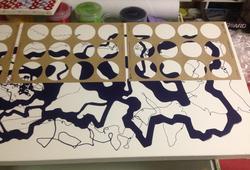 What remained of the circle 'labels' that were used in the painting on glass were placed over the enamel until the surface was covered in an orderly manner (yes order after chaos)
The idea being to only allow part of the conversations that are to be created from being recorded: memories
Using the beautiful nail polish enamels,  colours were dribble, with control, across each row
There is logic and order to the application of colour
The result when the sticker sheet was removed resembles that of writing, but doesn't give the full story
22/8/14 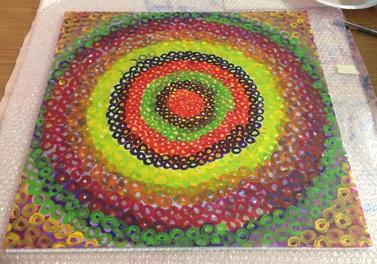 Paintings on glass involve the concept of memories and the technique of painting with acrylics and enamels on the underside of glass (august 19. 2014)
This is a photo of the backside of the glass, it has had several layers of gouache painted onto it
Glass is a lovely surface to paint on but it is fragile and so far I have broken two pieces
One was broken after 12 hours of work, shattering when I tipped the edge with a shoe when lowering it into the frame
the other broke as I was getting it out of the frame 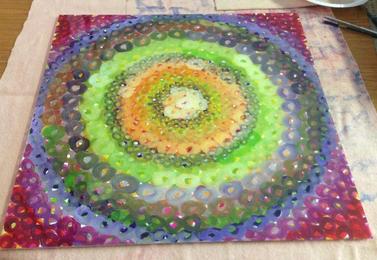 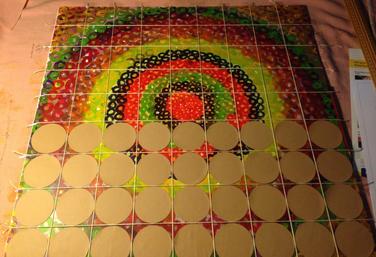 leaving a memory of what existed before

the string is used to retain accurate placing 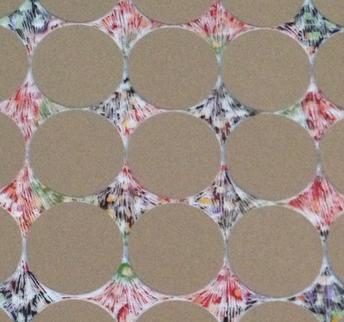 the paint was scratched off with a sharpened plastic chop stick

I have tried all sorts of scribes, nails, sharpened sticks and have found that plastic chop sticks are very effective and cheap
Powered by