ART LOVERS TALK
Wednesday 21 September 2016
10.30am - 12noon
Cost: FREE
I will talk about my exhibition, discussing
the reoccurring obsessions in my work and
will walk through the my creative process,
inspiration, evolution and concepts.
RSVP by Tuesday 22 September
03 5722 0865

'OBSESSIONS' focused on three areas: Blossoms, Pelicans and Circles.
These three areas have reoccurred throughout the whole of my art practice.

The prints developed in 2016 have evolved from re visiting paintings and prints, some new and some older. 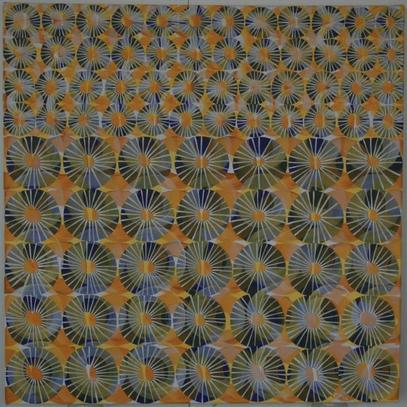 From this 2015 painting (60cms x 60cms) four prints were developed. See more in new works 2015
Looking left to right at the 4 images below
The first looked at the composition format used in the painting and simplified the information discovered, but left out the influence of the horizon line. (34cm x 34cms)
The second took this format and looked at the layers from a hand drawn perspective and added related circles in each layer. The first layer is lime green, then orange then lilac. the smaller 'background' circles changed sizes above and below the designated horizon line as in the painting. (31.5cms x 31.5cms)
The third is an enlarged look at a section of the second print. first layer orange, then lime green then purple (which looks blue because of the influence of the other colours). (40cms x 50cms)
The Fourth is a revisit of the format of the painting but included all the elements of the composition. It was re drawn in black ink, a section chosen and then enlarged. hence the difference in circle structure. (40cms x 50cms) 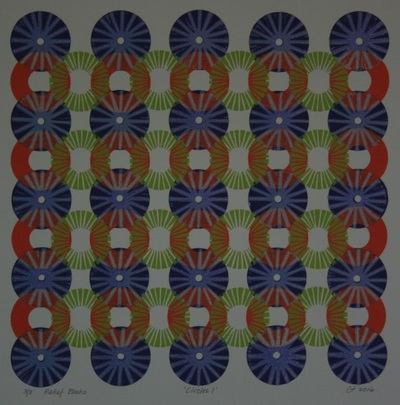 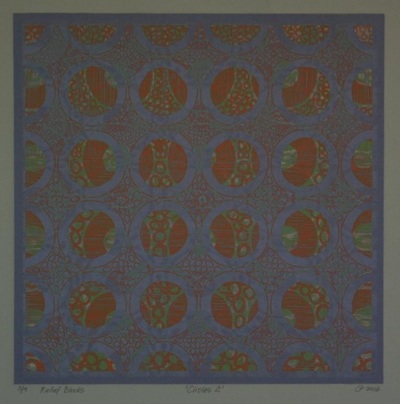 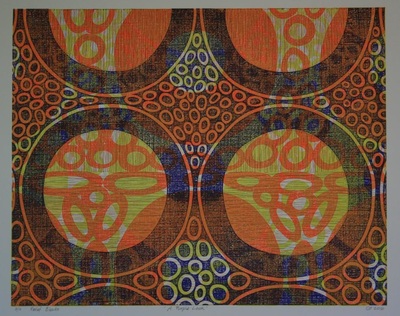 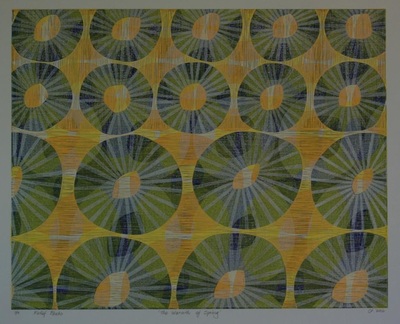 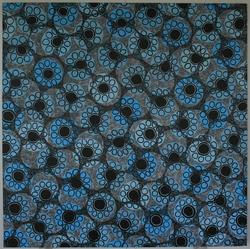 This painting was an interpretation of a a very small painting done on the reverse side of glass. (see new works 2015)
From this 2015 painting (1mtr x 1mtr)the two prints (pictured below) evolved
The first print (blues) translated the composition format into a print with 2 plates being used to create the print.
The first plate was an elimination block and the second was a plate created using a soldering iron and a hole saw. (31cms x 31cms)
The second print (white on ash) was lifted from the first plate after all the colours were created in the first print. What is left are the carve marks and the hand-carved circles with soldered centres. A very delicate print that I have called 'Winter Dew' and is printed on a beautiful  Sin Inbe paper called Thick Ash. (30cms x30cms) 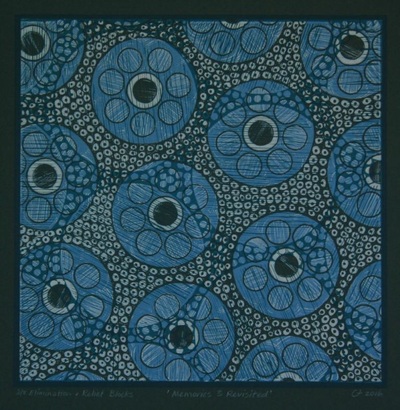 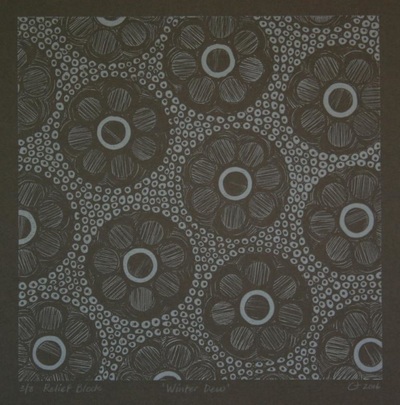 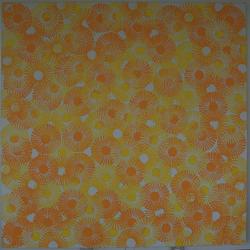 This painting and another painting was an interpretation of images from my wattle wrapping paper (see more in new works 2015)
From this 2015 painting (1mtr x 1mtr) three prints evolved (left to right below)
The first involved using the idea of the shape of the blossom and the random placement but also incorporated an activation of the negative spaces in the background. One plate was used and rotated with each colour in a predetermined pattern. The circle 'spokes' were hand carved and the circles in the background were soldered. (30cms x 30cms)
The second involved a single colour print from the plate used in the first print. Lilac on black paper. (30cms x 30cms)
The third involved create 7 circle plates cut with a hole saw and with hand carved 'spokes'. Each colour represents a different printing. The positioning and order of colour were predetermined. (30cms x 30cms) 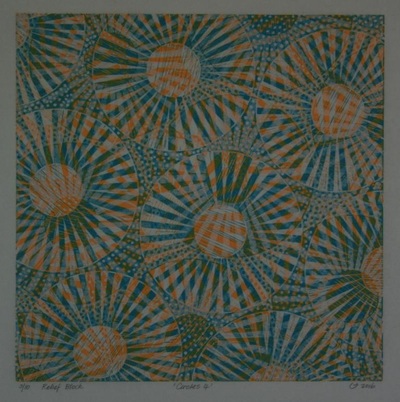 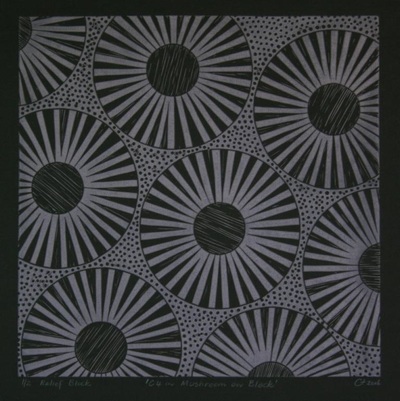 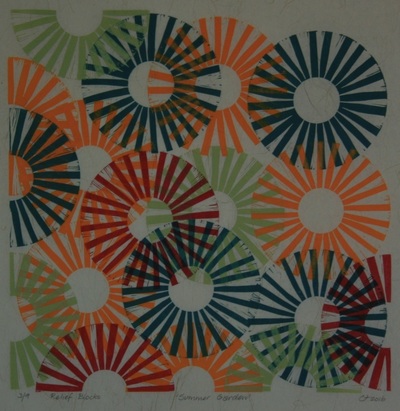 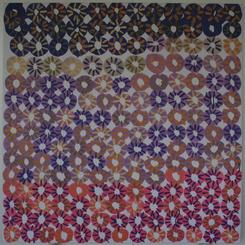 This 2015 painting developed from previous studies of blossoms and a colour scheme inspired by the paints used for the Wacky Birds and Boxes. (see Diversions 2015)
From this painting (1mtr x 1mtr) two prints developed (below).

The composition of the first involved taking a small area of the painting and enlarging it. From this a simple composition was created with a focus on the negative spaces and 'spokes'. One plate was used and this was an elimination block. (30cms x 30cms)

The second evolved by printing the eliminated block with the same pink used as the second colour in the first print, but without the first colour. The print was then hand coloured with colours inspired by the original painting. (30cms x 30cms) 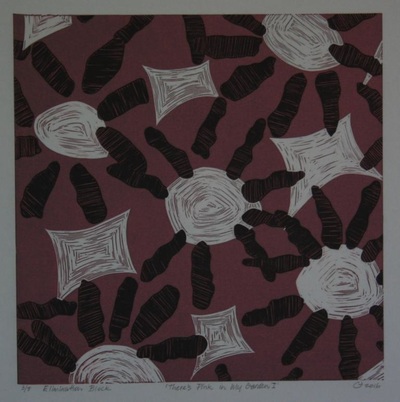 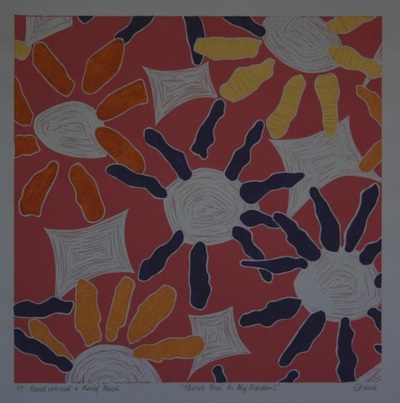